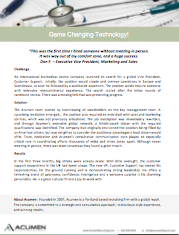 “This was the first time I hired someone without meeting in person. It was way out of my comfort zone and a huge success.” ~ Dan F, Executive Vice President, Marketing and Sales

An international biomedical device company launched its search for a global Vice President, Customer Support. Initially, the position would create and oversee operations in Europe and Scandinavia, to soon be followed by a worldwide expansion. The position would require someone with extensive intercontinental experience. The search stalled after the initial rounds of candidate review. There was a missing link that was preventing progress.

The Acumen team started by interviewing all stakeholders on the key management team. A surprising revelation emerged…the position also required an individual with sales and marketing abilities, which was not previously articulated. The job description was immediately rewritten, and through Acumen’s extensive global network, a British-based citizen with the required qualifications was identified. The company had originally envisioned the position being filled by an American citizen but was delighted to consider the additional advantages a local citizen would offer. Trust, dedication and Acumen’s consultative communication style played an especially critical role in coordinating efforts thousands of miles and time zones apart. Although never meeting in person, there was team consensus they found a great match.

In the first three months, big strides were already made. With little oversight, the customer support department in the UK had taken shape. The new VP, Customer Support has owned his responsibilities, hit the ground running, and is demonstrating strong leadership. He offers a refreshing blend of autonomy, confidence, intelligence, and a welcome surprise is his charming personality. He is a great cultural fit and a joy to work with.

About Acumen: Founded in 2007, Acumen is a Portland-based recruiting firm with a global reach. The company is committed to a strategic and consultative approach, its boutique-style experience, and winning results.